Posted at 10:20h in Articles by binuvpillai 0 Comments
0 Likes
Share

June was yet another busy month on social.

Find out all the social media news worth knowing from all the major platforms in our June 2016 roundup.

On June 3, Twitter announced they’ve begun testing the Promoted Tweet Carousel. In the announcement blog post, Andrew Bragdon, revenue product manager, explained that it’s “a new ad unit that gives marketers a rich canvas for brand storytelling using their own Tweets or Tweets about their brand by users who have given permission to the brand.” The new feature will allow advertisers to curate multiple Tweets into a single swipeable ad unit. Promoted Tweet Carousel is currently being tested as alimited alpha (an early version of the product that may not contain all the features planned for the final version) to accounts in select global markets.

On June 8, Twitter announced a new program for consumer and market research. Twitter Insiders is a network of more than 12,000 Twitter users, aged 16 and up, who participate in research studies, acting as an “anonymous virtual panel from across the U.S. and U.K.” The program is intended to be “a one-stop solution for recruitment, design, and collection of live research.” Agencies and their clients can work directly with Twitter Insiders or design studies in conjunction with CSpace, “a team of consultants who specialize in fostering collaboration between companies and their customers.”

On June 7, Twitter rolled out a redesigned version of the app for Android. Changes include:

The redesigned Android Twitter app rolled out globally on June 7. 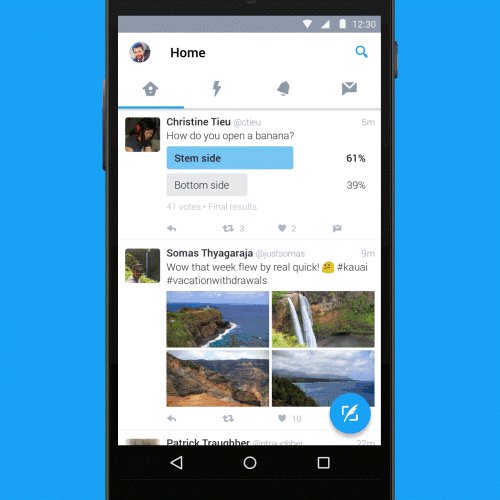 On June 7, Twitter announced that they’ve made it easier to embed timelines to websites and other content management systems (CMS). New functionality includes:

The change also eliminates the need to create and save widgets.

This feature will allow advertisers to target users who have recently tweeted or engaged with Tweets featuring emoji. Neil Shah, Twitter product manager of the ads API, explained in the announcement blog post: “This new feature uses emoji activity as a signal of a person’s mood or mindset—unlocking unique opportunities for marketers.” To access emoji targeting functionality, advertisers must reach out to one of Twitter’s official partners. View Full Article >>